Dimona – the "nuclear" program of "Shaarei Tzion" and "Toldot Yeshurun" 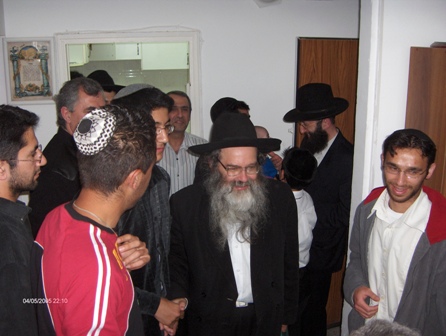 Before Pesach Rav BenTzion Zilber, the rabbi and the spiritual leader of Toldot Yeshurun traveled throughout many cities of the USA and Canada with a lecture series for the Russian-speaking communities , about which we wrote earlier.

Right after Pesach, Rav BenTzion was invited to speak at the southern branch of Toldot Yeshurun – in Dimona, the city known for its famous Israeli nuclear reactor. While the roads leading to Dimona are very different from American highways, they are tranquil and peaceful, overlooking the Negev Mountains with herds of Bedouin camels and sheep.

Rabbi Raphael Moshayev, a student of R. Shmuel Elishayev, opened a branch of "Toldot Yeshurun” in Dimona, only three kilometers from the famous Israeli nuclear reactor. Incidentally R. Shmuel Elishayev is a scholar who studied with R. Yitzchak Zilber (zt”l).  Rabbi Raphael made a siyum on Gemora - tractate Bava Metzia, to which Rav BenTzion was invited.

At the beginning of the evening, Rabbi Raphael apologized that the majority of the young people had not arrived yet. Even upon this special occasion, the students were determined not to miss their regular Torah class, which was taught by an avrech, and they joined right after their lesson.

The Jewish life of the Russian-speaking population of Dimona had begun through the energetic efforts of Rabbi Levi (an Israeli avrech, not Russian speaking), who settled in Dimona about 15 years ago.  As the city hosts many immigrants from Uzbekistan, his first initiative was to connect with them.

Rabbi Levi was honored to speak. In his speech he related that about 15 years ago a certain Bukharian Jew, who had recently arrived from Tashkent, consulted him.

I was astonished by this question. Before me stood a person, distant from any observance of mitzvot, but I felt that this question was not asked by chance, and so I replied:

-    “The best that you can do for your son is to send him to a place where he can become a G-d fearing Jew, knowledgeable in Torah, and capable of transmitting it to others.”

Thus Raphael became a student at yeshivat "Shaarei Tzion". His entire family began observing commandments by following his example. After many years Raphael (Rabbi Raphael) returned to Dimona with a mission from R. Shmuel Elishayev. He assumed the post of Rabbi of the Bukharian community in Dimona.  Hence we see the results of consulting with and following the advice of Torah leaders.

R. Raphael has been able to do where others have failed. “When I arrived, the maximum I could accomplish was to give a weekly lesson on Shabbat; today there are daily lessons, which a lot of young people attend....”

Rav BenTzion Zilber began his speech, when all young men arrived from the synagogue after their daily lesson. He was greeted very warmly. Until now many had heard about R. Yitzchak Zilber only through hearsay or from books, but now the students had a chance to see the son and student of the well-known Rabbi.

The audience greeted him as their beloved rabbi.  Indeed many years of his childhood were spent in Tashkent. It is interesting that the father of Rav BenTzion, Rabbi Yitzchak Zilber (zt”l) was the Rabbi and teacher of Rabbi Shmuel Elishayev, who in his turn is the Rabbi of their Rabbi in Dimona.

R. Shmuel, after arrival in Eretz Israel, established "Shaarei Tzion", a network of Torah institutions for Bukharian Jews, which today unites thousands of people in our communities all over Israel.

The evening continued, and the elder generation of listeners was very touched by the reminiscences detailed by Rav Zilber about the heroism of Bentzion Aksakalov. Because of  him, many children were able to observe Shabbat in Tashkent in the Soviet time. If not for the very late hour, and the long trip to Jerusalem, the audience would not have let the Rav go.