People like reviews. And although the Alm-ghty Himself has picked the time for Jews to let the year pass in review (and this happens more than once a year), in the world that surrounds us, this is usually done as the calendar year draws to a close. Let us look at what the website toldot.ru has accomplished in the last 365 days — and these accomplishments are less about us than about YOU, our dear users. We would like to point out not so much the 4,238,196 unique visitors (their number exceeds the number of visitors in the year 2012 by 300,000) who have visited our resource in the year 2013, but rather that which these people have found most interesting among the tens of thousands of publications on toldot.ru.

This, of course, serves as a wonderful recommendation to those who have not as yet perused these materials. We will not dwell on the exact numbers of visits on one particular page or the other — suffice it to say that each one of them has been viewed by 5,000 to 20,000 people in the course of the year.

Let us begin with the blogs where the top three is made up of the oldest and, at the same time, the most active bloggers: Rabbi Reuven Pyatigorsky — «Traditions of Jewish Education», R. Gadi Pollak who answers the most emotional questions with a simple system, and R. Avraham Cohen who reports sad cases of «democracy» in Israel — «Shame of the State of Israel».

Let us now turn to the «Video» department. The first place is taken by three most interesting cycles: Derech Hashem and Mesilas Yesharim by Rabbi Asher Kushnir, and Talmud classes for beginners — «Learning Talmud» by Rabbi Reuven Pyatigorsky.

On the topic of «Family», the most important question was «What is a real man?», the second popular «How does Judaism view premarital relations?», followed by (we are gravitating from the men to the women) «Until what age is it customary to have children?».

Among the audio classes, Rabbi Asher Kushnir»s popular series on «Secrets of Marital Bliss», «Basic Principles of Childraising» and «The Meaning of Life» clearly took the cake. Among the second popular part of the website, «Articles», the articles on «Jewish Clothing», on the commandment of «You Shall Not Covet» and the Translation of the siddur (Jewish prayer book) into Russian: «Shacharis. The Morning Blessings» rated the most popular.

Among the questions to the Rabbi which already for many years have been the most popular category on the website (drawing more than 1,300,000 visitors), the first place is taken — quite surprisingly — by the question «What is a Bar Mitzvah?», followed closely by a much more obvious question: «I am a Jew and I do not understand: Why can I not marry a Non-Jewish girl?» Close on its heels follows a question that is asked in every generation — «What is a conscience, and what do I need it for?». The most interesting topics to our readers in this category are «The Jews and the Nations of the World» and «Life Situations».

We will conclude with a few facts and figures for those who interested. The top five countries where our readers reside are the Russian Federation (50%), Ukraine (17%), Israel (16%), the USA (4%), Belarus (3%) and Germany (2%). There are more female readers (53%) than male (46%). It is not for nothing that the Talmud says that «women were given additional wisdom». More than half of our readership is comprised by people aged 19 to 40. As a matter of fact, readers over 50 years of age are quite active (15%). It would seem that this age group has more free time — the children are grown and the grandchildren not yet born — as well as a thirst for personal growth and education. 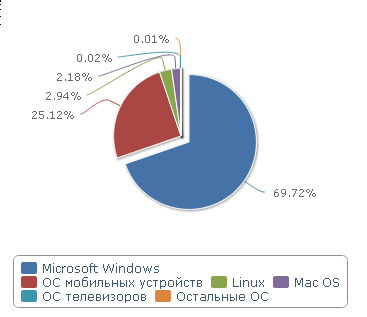 Smartphones and other mobile devices are rapidly gaining in popularity — while in 2012 only 13% of users came onto our website from mobile devices, in 2013, their number has grown to 25%. One third of users has sensor screens — it seems that in a few years from now, the computer mouse will be a species under the threat of extinction due to lack of necessity.

A special mention of searches conducted on the website is in order. As a rule, typical searches are done for «Jewish holidays», «Jewish names», «Jewish songs», «Kabbalah» and the like. However, «King Salomon» is being searched for with astonishing regularity (rung 6-7) which attests to a prevailing interest in the wisest person on Earth, as he was characterized in the Tanach.

It is for good reasons that the social networks are considered the main source of news for today's internet user. Every month, our website is accessed by tens of thousands of owners of accounts on Facebook, «InContact», and other similar sites. These visits peaked in December at 22,000 of entries from Facebook and 7,000 from «InContact».