Every Dollar Produces What It's Supposed To

Every Dollar Produces What It's Supposed To 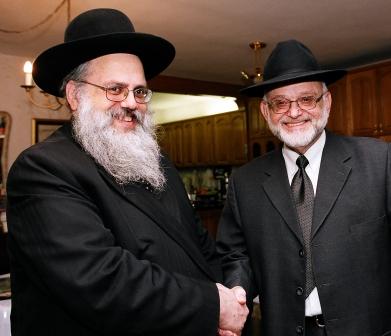 His overwhelming enthusiasm and praise for our organization was heartwarming and encouraging. Here are a few excerpts from that meeting, which Rabbis Avraham Cohen, Director of Toldos Yeshurn, and Yehuda Avrech, Assistant Director, also attended:

Rabbi Rozner: Toldos Yeshurun is by far one of the best projects. They are really doing a job! No one has to sell anyone on the work that they are doing. They are very successful at what they do, and Mr. Wolfson sees that they are very dedicated and devoted. No one has to tell anyone that the most potent antidote to Chlioni'ism among the Russians here today is Toldos Yeshurun. It's one of the best Wolfson projects!

Rabbi Rabinowitz: Does the Wolfson Foundation usually give a project 50% (of its budget)?

Rabbi Rozner: Mr. Wolfson says that if you raise 50%, he'll give the other half -- and even more! Many places are limited because they can't raise the matching amount. It really is a match; we are already giving the money. All they have to do is bring in the 50% and it will be matched -- and maybe they'll get even more.

Rabbi Rabinowitz: What is the criterion for receiving the help of the Wolfson Foundation?

Rabbi Rozner: We have inspections to affirm that the recipients are using the money correctly. We have set up a system set up to check. We send inspectors on a regular basis. All projects are good, but not all projects meet our requirements. We check to make sure that every dollar goes to produce what a dollar should produce. I can tell you about them (Toldos Yeshurun). They go beyond our requirements. If we tell them to being in one hundred, they bring in two, three hundred! There's something about them, a charm that attracts people. I guess what they say is, "try it. You'll like it. You'll buy it." They make the students into Bnei Torah because they go all the way with the Emes. That's their success. They work with the Russians; the good thing is that they sell Emes -- not candies. Others give out the candies so they can tell them a story, and they have to tell a story in order to get them in. The message of the Rabbanim is clear, as we know it. Toldos Yeshurun goes all the way with it.

Rabbi Rabinowitz: Is there is a difference between bringing in Russians and Chiloni Israelis?

Rabbi Rozner: "Yes. First of all, there is a big difference between them. The biggest problem in Yiddishkeit in Israel is the Russians. There is a difference between the Chiloni Israeli and the Russians. The Russians brought in an alien culture to this country. It is easier to work with a Chiloni and bring him closer to our spiritual heritage than with Russians, because the Israeli has a structure of tradition. Toldos Yeshurun is making a dent that will stop all of the bad influence from that alien culture, and they should continue L'olam Vaed.

Rabbi Rabinowitz: The way of Teshuva itself is different, and therefore it is so important to succeed.

Rabbi Avraham Cohen: Over the past fifteen years help was given -- help which was to bring the Russian Olim closer to Torah and Mitzvos. That was the foundation. Now we have 350 avreichim and avreiciyot, which means 350 milamdim, and each one can build his own place, and continue. Now is the moment to help! In the beginning it was harder. Now it's easier.

Rabbi Rozner: I'll answer you: all of the success that we want to have is in order that our people should stay strong in our Dat, the emunah in Hakadosh Baruch Hu, the Torah and Mitzvos Maasiyos. That's the only thing, and it's proven. For two thousand years the Jewish People existed without a land. How is that? It's because the universal answer is faith in G-d, and Torah. The difficulty is the lack of manpower. Here is their success! Toldos Yeshurun creates its own manpower. The amazing thing is: who could be mikrarev the Russians? Only the Russians -- and they are doing the job. They bring them in and train them and they become Chonchim, Rabanim, and Anshei Haspa-ah, people of influence. They are able to influence their brothers and sisters to go in the derech, to keep Am Yisroel Chai liolam vaed.

You know, when they first came, we saw who we were helping and who we were handling. They are the best investment for Wolfson's money. Even Wolfson sees that the investment paid off, and paid off big!

Watch a video presentation of that meeting.