CELEBRATION OF THE TORAH

Hanukah is a celebration of the triumph of Jewish traditions over assimilation. It is therefore symbolic that Toldos Yeshurun has its annual meetings on Hanukah. Hundreds of teachers, and thousands of their Russian-speaking students, come from many different places in

— the spiritual survivors among hundreds of thousands of Jews from the former who have assimilated.

This year, Toldos Yeshurun didn"t conduct its usual meeting. Instead, an enormous accomplishment was celebrated at the lighting of the second Hanukah candle: the completion of the writing of a Torah Scroll in memory of the founder of Toldos Yeshurun, Rabbi Yitzchak Zilber, who is revered as a father of Russian-speaking Jewry. 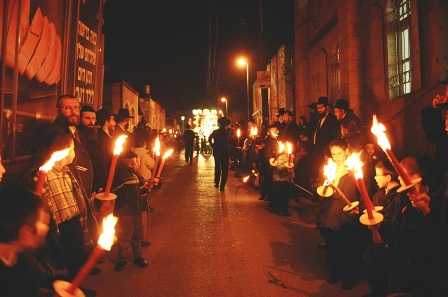 An impressive crowd of people marched from the Zvil halls, where the rabbis and heads of yeshivas had written the last letters of the Torah, through the Beit-Israel district, towards number

23 Reichmann Street
, where Toldos Yeshurun has its yeshiva. Rabbi Benzion, who is Rabbi Yitzchak Zilber’s only son, headed the procession. Russian-speaking rabbis and avrechim were close behind, followed by large numbers of students including «the beginners», some of whom didn’t even wear scullcaps. Marchers arrived from many towns in — from Ofakim in the south to

Haifa in the north.

This Torah Scroll is truly unusual. Instead of a single (or many) donors contributing money for this Scroll, thousands of Russian-speaking Jews who keep its commandments took part in writing it. For many of them, this was their first opportunity to fulfill the 613th mitzvah — the commandment to write a Torah Scroll itself.

The children of the Russian-speaking newcomers, holding torches in their hands, filled the streets of the Beit-Israel district of Jerusalem. Many students from nearby Yeshivas Mir joined the procession.

Music and dancing filled the narrow streets. It seemed as though the buildings, lighted with Hanukah’s candles in every window, were celebrating and swaying with joy. The youth even forced a few Arab passersby to dance; as if they were new students of Toldos Yeshurun"s evening kollel.

Toldos Yeshurun"s Russian-speaking youth form a very close bond with Yeshivat Mir. All week they study at the yeshiva"s premises and receive their lessons from its rabbis, while living in the nearby Toldos Yeshurun hostel, where they pray and study only on Saturdays. The best of them go on to attend yeshivas elsewhere in Israel, or get married and attend kollel, or study in chavrusa with the avrechim of Yeshivas Mir. 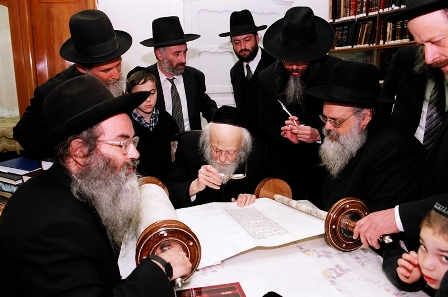 The leaders of the organization, and the teachers and students of the yeshiva, visited outstanding rabbis, including Rabbi Eliyashiv, Rabbi Shteinman, Rabbi Kanievsky and Rabbi Levkovich, who wrote letters in the Torah.

Rabbi Eliyashiv, who spoke of Rabbi Yitzchak Zilber during his lifetime as «the G-d-fearing man, one of the 36 of our generation», cordially greeted his son Rabbi Benzion Zilber, who continues his father’s cause and occupies his place of the spiritual leader of Toldos Yeshurun. Rabbi Eliyashiv blessed also Rabbi Moshe Eliezer Rabinovich, who coordinates American support for Toldos Yeshurun, and came in especially for the completion of the writing the Torah Scroll. 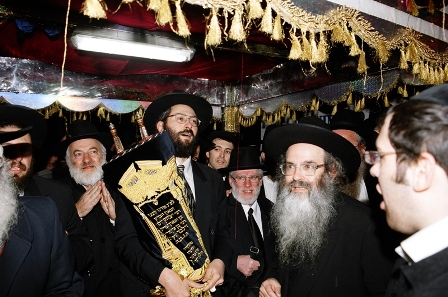 Because the Beit Medrash of Toldos Yeshurun isn’t large, most of the crowd had to remain outside in the street when the Torah was being brought into the premises.

After the procession, everyone came back to the Zvil halls, where a meal was served. Zvil was chosen because it"s not far from the yeshiva, but it could not accommodate all the guests. People stood in the passages and next to the walls, but none was offended. The joyful atmosphere of the celebration could be felt all the way to 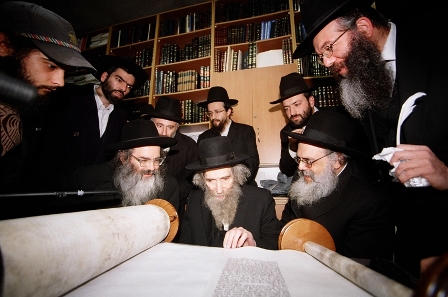 Rabbi Benzion Zilbert thanked everyone who participated in this Torah Scroll writing, especially the teachers and their wives. Because the learning programs of Toldos Yeshurun are generally in the evenings, the absence of the husband from the family places a heavy burden on the wife. 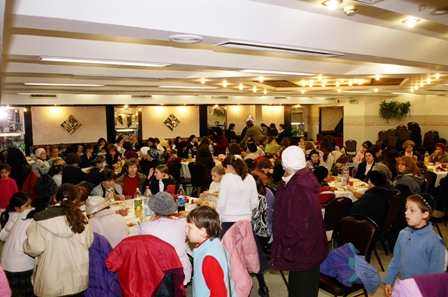 Other speakers at the festivities included: Rabbi Moshe Eliezer Rabinovich, who directs activities in

Rabbi Abraham Greenboim, director of the American charity organization Keren Wolfson, said in his speech: «I’m proud that Toldos Yeshurun has, in such a short time, made a real revolution on the ‘Russian street’, and we are happy that we are worthy of taking part in it.»

At the end of the proceedings, Abraham Kohen, director of Toldos Yeshurun, announced preparations for celebration next Hanukah of the completion of study of the Babylon Talmud, to be dedicated in memory of Rabbi Yitzchack Zilber. The teachers and students of Toldos Yeshurun have been invited to pledge their efforts to learn an entire treatise of the Talmud during the coming year.