Building 107 in Jerusalem’s Sanhedria Murchevet neighborhood. For years Jews from the former Soviet Union came streaming to this first-floor apartment to hold a bris or a wedding, to hear a shiur or seek advice. Agunos came to get released from their marriage and others came to ask for a brachah or just to spill out their hearts.

One year after the histalkus of HaGaon HaRav Yitzchak Yosef Zilber, zt”l – renowned for his mesirus nefesh in keeping Torah and mitzvahs under the communist regime and later as a spiritual guide for Russian speakers in Eretz Yisrael – I spoke with his son HaRav Ben Tzion, the heir to his spiritual legacy. I expected to find the familiar apartment empty and desolate, but drawing near I heard the sounds of intensive Torah study – rischa d’oreisa – emerging from within.

In the new building HaRav Zilber did not live to see were 18 avreichim poring over their Gemaras. It seemed as if any moment HaRav Zilber would walk in, a reassuring smile on his face, giving warm pats on the back and sharing some chiddush he had just come up with on the way over. 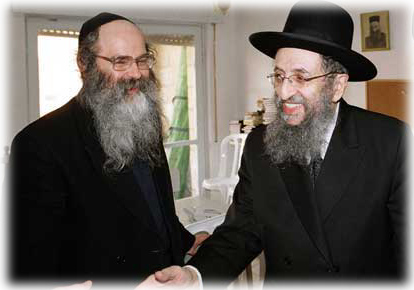 From there I continued on my way to the home of HaRav Ben Tzion Zilber, where we spoke at length about the great void following his father’s passing and whether Toldos Yeshurun activity has diminished or regressed, chas veshalom, in his absence. “Baruch Hashem the Tshuva Movement has expanded. Every respective institution and organization has grown, so outreach activity as a whole has increased,” replied HaRav Ben Tzion with a graciousness distinctly reminiscent of his father, zt”l. “A lot of people who didn’t keep Torah and mitzvahs are becoming observant and those who never learned are begin to learn.”

Our conversation was interrupted time after time. Since these exchanges were all carried on in Russian I had time to study HaRav Ben Tzion’s tone and facial expressions and body language, which show much of the simplicity, righteousness, perseverance, energy and insistence on truth so deeply ingrained in his father.

Is Toldos Yeshurun following the same path your father, zt”l, blazed, or is it setting a path of its own?

HaRav Ben Tzion Zilber: I took some things from others, from the roshei yeshiva of Yeshivas Mir, zt”l, HaRav Chaim Shmulevitz, HaRav Beinish Finkel and HaRav Nachum Partzovitz. After my wedding I spent a certain period of time with my father-in-law, HaRav Baruch Rosenberg, zt”l, and ylct”a HaRav Chaim Kanievsky and others.

What was his main message?

His approach was to do things that are for the sake of Klal Yisrael. The major turning point for him was following his conversation with HaRav Yitzchak Hutner, zt”l. Of course there is no comparison between my father, zt”l, and the Chafetz Chaim, but they do have a few things in common. And this is one of them: doing for the sake of Klal Yisrael. Of course all the things the Chafetz Chaim did were for Klal Yisrael, from Shmiras HaLashon to the Mishnah Berurah and other works. My father also acted in areas that were of benefit to Klal Yisrael.

They shared something else in common: what my father said was accepted by all. The books he wrote were also accepted by every group – Torah-true Jews as well as well as Jews still far from Yiddishkeit, Chassidim and Lithuanians – everybody. The divrei Torah he said were full of vitality. He could repeat the same vort several times, always with the same vitality. And this came across whenever he talked about the truth of the Torah, the words of the Prophets, etc. His remarks always had the same enthusiasm and verve, as if he were making them for the first time.

What is the operating principle in your outreach activities for immigrants from the former Soviet Union?

Our hope is for each and every individual to achieve his potential. Obviously the goal is for them to become bnei Torah, but not everybody is cut out for this. At our kollelim generally they start to become observant and some go to yeshiva. This depends largely on the age and circumstances when they enter the tshuva world. It also depends largely on the degree of impact of the outreach organization and the chavrusa, etc.

The first kollel was set up five years ago by Toldos Yeshurun Director R’ Avraham Cohen. When he made aliya he was in good financial condition so he looked for a chavrusa to learn with for a few hours a day, but couldn’t find one. He encountered difficulties everywhere for various reasons. He said in Moscow anyone could find a study framework, whereas here in Eretz Yisrael opportunities were very limited. I’m not talking about a yeshiva where one goes to learn for all of the sedarim, but rather people who want to study just part of the day, learning in chavrusa.

After he got married he came up with an idea to arrange chavrusos for anyone who wanted to learn. It began with a study group at home run by R’ Asher Koshnir, a highly esteemed avreich from the former Soviet Union. Afterwards he arranged five chavrusos at Beis Knesses Ezras Torah here in the neighborhood. An avreich who had already learned for several years would learn with newcomers to Yiddishkeit. That’s how the first kollel got started. Little by little the program expanded. People were coming from far and wide until eventually it was decided to save them the trouble of having to travel from far away. We opened in Beitar Illit, Neveh Yaakov, Nesher, Netanya, Kiryat Sefer, Ramot and today, b’ezras Hashem, we have 58 branches around the country.

A year ago a special kollel for distinguished avreichim from the former Soviet Union was started in your father’s home. Can you tell us what this idea is all about?

Two years ago the idea of bringing Russian-speaking bnei Torah to the point of hora’ah was introduced. It took a while for the idea to get started. Funding had to be arranged for the kollel and a suitable rosh kollel had to be found. The plan was realized after my father’s petirah. HaRav Moshe Petrower, who has many years experience in this type of kollel, accepted the post and on Rosh Chodesh Elul the kollel opened with a group of outstanding avreichim, and b’ezras Hashem the kollel has been very successful. Rischa d’oreisa can be felt there – not just during the sedarim, but between the sedarim as well. They delve deep into the halachic topics they study and during the evening hours these avreichim are roshei kollelim at the Toldos Yeshurun branches for Russian-speakers interested in Yiddishkeit. I’d like to take this opportunity to thank the Wolfson Foundation, which agreed to cover the lion’s share of the kollel’s funding.

For years prodigious resources and work have been invested into outreach programs for Jews from the former Soviet Union. HaRav Zilber, zt”l, who stood at the fore of all of the various outreach projects, turned innumerable Jews into genuine bnei Torah and created rabbinical leadership for kehilos set up throughout Eretz Yisrael. Today thousands of Russian-speaking families are keeping Torah and mitzvahs after being severed from any trace of Judaism for decades.

HaRav Petrower: Toldos Yeshurun activity focuses on avreichim who organize kollelim, shiurim and chavrusos in various locations. The majority of this activity takes place in the evening but we would also like to set up a study framework for avreichim who have already been learning in yeshivas and kollelim for a number of years, a kollel that would boost their learning to a higher level, turning them into morei hora’ah, talmidei chachamim and the spiritual leaders of Russian Jews. The task of setting up the kollel has fallen into my hands.

Our aim is to make avreichim into talmidei chachamim. Not just accumulating knowledge and learning halachah quickly and superficially, but delving into every sugia and learning it comprehensively. Less emphasis on quantity and more on quality. We already have experience with a similar kollel, Imrei Yosher, which has been in existence for over 20 years. B’siyata diShmaya it has already been a great success. There is a mandatory study program, including tests The whole goal is to nurture a group of outstanding talmidei chachamim.

The five-year program is endorsed by gedolei Torah in both Eretz Yisrael and the US. Recently the heads of  Lakewood decided to hold a parlor meeting to promote the Lakewood Development Project of Russian-Speaking Rabbinical Leadership. “For the first time ever secular Jews will be provided, b’siyata d’Shmaya, with the leadership and help they need,” reads a letter of endorsement signed by HaRav Malkiel Kotler, HaRav Yerucham Ulshin, HaRav David Shustal, HaRav Yisrael Tzvi Neuman and HaRav Mattisyahu Salomon. “Bnei Torah who can relate to them, guide them and bring them back en masse to Yiddishkeit, by becoming true bnei Torah themselves.”