While Bnei-Brak may be called the "religious capital of Israel," it is nevertheless a big mistake to assume that the "Toldot Yeshurun" branch is not needed here. Exactly one year ago, here in Bnei-Brak, a new Kollel of this all-Israeli organization has opened up, thanks to Rav Aharon-Yehuda-Leib Shteiman, a great Torah authority. Bnei-Brak contains many Russian-speaking inhabitants, of various religious standards, who do not have much access to Judaic classes on their level, even though such classes do indeed exist. For example, on Sundays and Tuesdays there are excellent classes on the yeshiva base of "Netivot Olam".

Some people here consider themselves almost ultra- orthodox, yet they are missing the most vital fundamental knowledge about Yiddishkeit. Consider the following case: one of our local students is very well aware of the fact that on Shabbat one cannot ignite a fire. However, he did not even suspect that extinguishing the fire is also forbidden according to the Jewish law. For people like him, classes at "Toldot Yeshurun" would be very beneficial, as they have even admitted themselves. 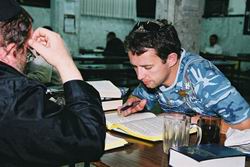 As per the geographic location of Bnei-Brak, which happens to be in the center of Big Tel Aviv, gives everyone from Gush Dan an opportunity to learn. In fact, people come to “Toldot Yeshurun" in Bnei-Brak from Tel Aviv, Petakh-Tikva, and even from Ariel, the city located in Samaria. 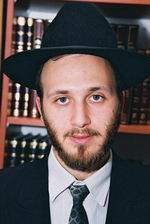 At the center of the local "Toldot Yeshurun" Kollel, stood only eight people and their local leader, Ovadyah Tukhnir. As of today, that number has almost tripled. Our community contains young people, the working public, seniors, present-day programmers, and even a former music school principal! Most of our inhabitants have some connection to their Jewish traditions and identity, yet many of them are unable to learn effectively on their own. They need some outside help, and that is why “Toldot Yeshurun” is very much needed in our community. 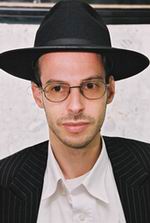 We give three classes a week here. On Sundays, Asaf-Simcha Friedman, who happens to be Israeli, gives a deeper and more serious class. During the first hour and a half of Rav Friedman's class, the students learn in pairs, B’chavrusa, a standard learning style embraced by all the branches of "Toldot Yeshurun". After that, most of the students, as well as the teachers, stay for the class given by any one of our prominent lecturers. While this class may be quite complicated for most novices, programmers might be able to grasp it better by virtue of the nature of their professions, which enables them to immerse into the logistics of the Talmud. Furthermore, the complicated nature of this class would motivate them to move forward. Tukhnir illustrated that in the following Mashal, or analogy. When one attempts to run after a train that’s on its way, he has a chance of catching it. However, if he attempts to run away from the train, he risks getting crushed. Similarly, the essence of a Jew is to always try to move forward, and Rav Friedman’s class can certainly help the students achieve just that.

On Tuesdays, Rabbi Simcha Ackerman, a long time head of the Russian-speaking division of "Netivot Olam”, conducts a class (in Russian) on the laws of Shabbos and holidays. And finally, on Thursdays, Rabbi Raziel Minke, a truly astounding man, gives a weekly Parsha class. 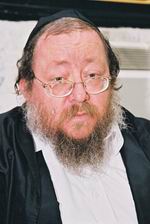 Rav Raziel Minke
He is a native Israeli and journalist, a Gur Hasid as well as a former leader of Gur yeshiva, and a member of the Bnei-Brak Rabbinical court of law. For the past few years, Rav Minke and his wife have been working very hard to alleviate the spiritual ramifications of the former Soviet Union. Rav Minke has a very big family, but all the same, for almost every holiday there are a lot of guests in his house, many of which are Russian-speaking, and they feel very comfortable and at home there.

Perhaps, one drawback in the Bnei-Brak branch of "Toldot Yeshurun" is a slight disunity in the group. That is where local activist Moshe Varshavsky came in. Every student was asked to prepare a five minute lesson to the rest of the class. As a result, everyone had a chance to express themselves and talk about topics and issues that reached them personally. Because it was a small circle, this gave the students an opportunity to connect and bond. We also have high hopes for the up coming joint trip of the all-Israeli gathering of “Toldot Yeshurun", for it gives every representative of each branch to feel that he/she is a part of a united, friendly community!