The power of minority 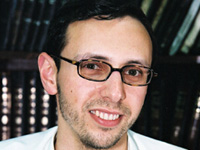 Reb Reuven gives classes for not-yet-religious peple who participate in "Toldos Yeshurun" programs
Chanukah! Here it comes again this wonderful holiday of lights, illuminating the Jewish homes and spreading out its glorious message to the world The great miracle happened here.
And yet, what is the meaning of this miracle for us today, what is the lesson to be learnt from these radiating lights of the chanukiya?
The Macabees won a great victory - the Greeks, were totally destroyed and the country liberated. Here they made it into the history-a great victory of the Jewish warriors? But Chazal shifted out focus to show us something that happened in the Temple-Greeks defiled it, but one jug of oil miraculously remained untouched, sealed by the Cohen Gadol. The small amount of oil lasted for eight days - so do we kindle our chanukiyot for the eight days of the Holiday ?
Why don't we mention our military success and what is this whole light about? Chanukah rcalls the rededication of the Temple (hence, Chanukah dedication), not the courage of the Macabees- and this fact needs to be understood. As R. Hirsh points out the story of Chanukah is clash of the doctrines, two civilizations, which until this very day were compete for the mastery of the world - Hellenism and Judaism.
Alexander the Great conquered almost the whole civilized world, brining with him Greek morals and culture, which made him easy to conquer the whole Orient. Minds opened willingly to the Hellenic spirit, which trains the intellect and flatters the scenes. No obstacles lied on his way, till he reached Judeah. Only Jews regarded as illusory what all others considered to be true. Greek culture offers man his own pleasure, his own sense of grace and beauty as the motive for his own perfection- so, becomes a source of his own greatness, "measure of things" - and the same time, it leaves him subject to human weakness, errors and delusions. Greek spirit bolsters wisdom, but only rational human wisdom, it is brightened by transcendental and mysterious, since it can't control it. But Jewish spirit brings man to the real source of greatness, where his mind becomes unfolded and connected to the eternity - it brings man to God, and therefore is not afraid to recognize its dependency on him.
So, it was a Kulturkampf, in which we are the minority? or was it just in the past? Yes we do remember the heroic victory of the Maccabees- the victory of the weak over the strong, as we are told to remember in our prayers- and the miracle on the battlefield gets its it real shapes in the radiating lights of the Menora, kindled by the only jug of the pure oil, one tiny dot in the sea of darkness and impurity, reminding us that might is not always right. Yes, we are the minority and were chosen as such for our historic mission. So it was from the very beginning- Abraham the Ivri, as R. Judah interprets: the entire world was one the one side, the side of polytheistic falsehood, and he alone one the other, side of truth and purity, with his G-d. Like this was all of our history - triumph of survival of "stiff-necked" minority unwilling to dissipate and to stop its mission - brining the Light of G-d to the entire world.
You are few in numbers, says G-d, and therefore you must be strong in spirit- "do not hollow the majority to do evil!"
"Not by might, not by power, but by my spirit" (Zechariah 4:6) these words of the profit help us appreciate the hill significance of the Chanukah, which celebrates the triumph of a small group of faithful over the majority, that exulted in its power, influence, and sheer numbers.
This is the Chanukah to the faithful of our day- one tiny spark of light kindles billions of lights.