The light of Torah in Ofakim

With the assistance of the organization "Toldos Yeshurun", the first kosher Torah scroll was brought into the "Ohr Eliyahu" synagogue.

With the assistance of the organization "Toldos Yeshurun", the first kosher Torah scroll was brought into the "Ohr Eliyahu" synagogue, amid tremendous joy. This was not just another hachanas sefer Torah: this was a celebration that marked a milestone in the growth of the Russian-speaking Torah community of Ofakim.

In many ways Ofakim is no different from any other Israeli town. It is home to many new immigrants, primarily from the former Soviet Union. But Ofakim has its special side: the thriving evening Torah center for Russian speaking Jews. Here, new immigrants participate in nightly Torah classes, as well as learn one-on-one with kollel men who speak their language. This Torah center emanates a light of spiritual beauty which belies Ofakim's plain exterior.

The Torah center, founded primarily by a group of Jews from the Caucasus area of the former Soviet Union, is housed in the "Ohr Eliyahu" synagogue–which just received its first Torah scroll written according to the exacting requirements of Halachah. The Torah scroll's arrival is due to the unending efforts of the Torah center's director, Rabbi Michael Gitlin. 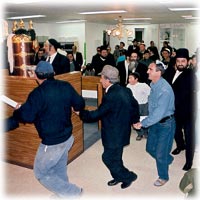 Hundreds of singing and dancing people escorted the Torah scroll through the quiet streets of Ofakim, while the surprised local residents watched through their windows. Dancing, words of Torah, addresses by leading rabbis... it was a formidable celebration for a small, developing community. A number of Caucasian rabbis arrived for the event, including Rav Yehudah Yaakovov, who will shortly be inaugurating his large new synagogue in Tirat HaCarmel.

Rabbi Reuven Elishaiv, rabbi of the "Ohr Eliyahu" synagogue, a young kollel graduate: "People wish to return to the heritage of their forefathers. But how is this wish translated into reality? Yiddishkeit is based on Torah-observant Jews, community leaders, rabbis and scholars who teach Torah, etc. Here lies the difference between Ofakim and other middle-sized Israeli towns. We are blessed with a large number of Russian-speaking kollel men, mostly young and full of energy, who are possessed by a desire to share their knowledge and way of life with their fellow immigrants.

"Who would have believed when we opened the Russian language Torah center here, together with Rabbi Michael Gitlin, that dozens of Jews would attend every evening? The synagogue has come to life! Even HaRav Zev Weisbein, one of the outstanding Russian-speaking Torah scholars of Ofakim, delivers a class here. We have well exceeded all expectations." 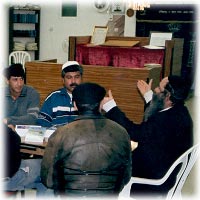 The celebration was followed by a class taught by HaRav Ben-Tzion Zilber shlita (son of the eminent HaRav Yitzchak Zilber shlita, founder of "Toldos Yeshurun") who came specially from Jerusalem to participate in the event. This unique class brought together both the regular students and learned kollel men, all Russian speakers. They went on into the late hours of the night. The participants simply did not cease to ply their rare guest speaker with questions...

Rabbi Michael Gitlin, the Torah center's esteemed director: ""Toldos Yeshurun", headed by HaRav Yitzchak Zilber shlita, is the organization that brings together the young Russian-speaking teachers and disseminators of Torah, most of them kollel men. "Toldos Yeshurun" unifies their efforts and strives to harness the tremendous potential of Russian-speaking Torah Jews. This is what is taking place in Ofakim.

"With the blessing of HaRav Kamil shlita, Rosh Yeshivas Ofakim, we have succeeded in developing a strong core-group of energetic kollel men who happily devote themselves to teaching Torah in the evenings to immigrants of similar background who are not yet Torah observant. Their common language is a powerful tool in reaching people's hearts and establishing a bond. It helps along the not-always-easy process of returning to Yiddishkeit.

"This is the secret of our success: we do not engage in outreach nor do we lure people with fantastic promises. We simply teach them Torah. The Torah speaks for itself. Through the process of Torah learning, young immigrants become acquainted with Judaism and decide for themselves whether to become Torah observant. A person cannot be forced into this difficult decision; but he can be provided with the knowledge he needs and can be exposed to the warmth and light of our holy Torah. This enables him to say 'yes' to Torah and mitzvos.

"The tough and sometimes agonizing process of return to Yiddishkeitthat our students undergo is made that much easier by the native Russian with which we are able to communicate. And for the few who are already fluent in spoken Hebrew, we have Israeli-born kollel men too."

HaRav Ben-Tzion Zilber shlita was moved by what he saw in Ofakim: "What's special about the Ofakim Torah center is not just its great momentum and vitality, which are thanks to Rabbi Michael Gitlin. What stands out is that in contrast to other branches of "Toldos Yeshurun"–an organization that is under the auspices of Ashkenazic Torah leaders such as HaRav Eliashiv shlita, HaRav Shteinman shlita and HaRav Auerbach shlita–around eighty percent of the students in Ofakim are Sefardic Jews, from the Caucasus.

"But this has not affected the rapport. Thanks to our common native tongue, which we have all inherited from our former "homeland", the Torah's illumination has spread to all. May HaShem help that many more centers like this be established. I know that among Jews from the Caucasus there is a tremendous thirst for Torah. We must bring up more Caucasian kollel men. And those Caucasians who have already learned in yeshivos and kollelim and are able to take on the task, must open up new Torah classes.

"This is our goal; this is the work of "Toldos Yeshurun": to encourage and motivate young Russian-speaking kollel men to open new classes and new Torah centers."